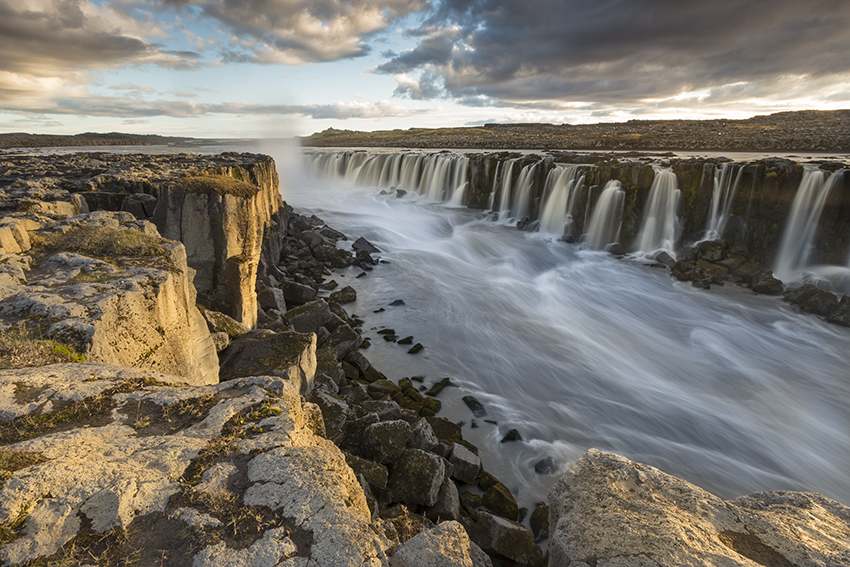 Iceland can be unforgiving but with a night’s sleep and an upturn in the weather it was an altogether chirpier band of photographers that I met at dawn the following morning. The sky promised much but in the event delivered little – welcome to landscape photography in Iceland.

Our time in the north around the picturesque Lake Myvatn took in volcanic plateaux, thundering waterfalls and exquisite autumn foliage in the scattered boreal woodland that ekes out an existence in this country, which in geological terms is barely out of nappies. A half-hearted aurora was to be our first and, as it turned out, our last glimpse of this magical phenomenon but during the day, rainbows scudded above Aldeyjarfoss and warm evening light kissed the rampant Selfoss, both waterfalls that take a bit of time and effort to seek out.

A long drive on a blue-sky day took us to the remote Westfjords, an area unlike much of Iceland, that remains relatively unphotographed. Distance, rough roads and unpredictable weather (as if this is any different elsewhere in Iceland) protect the Westfjords from the mass tourism that has gripped the country’s south coast. And so it was we had this wild coastline bedecked in autumnal hues, pretty much to ourselves, apart from a rather cute arctic fox we stumbled across. The weather was changeable and the driving hard but we managed a few moments of pure magic and if my camera didn’t capture the magnificence of this place, the image is safely stored on my cranial hard drive.

Our final stop took in the remarkable Hraunfossar, a series of mini waterfalls seeping from under a lava field amidst a carpet of autumn foliage. Hraunfossar trickles rather than tumbles but finds it way into an aquamarine river, coloured by glacial run off. A dawn shoot and a hearty breakfast left us prepared for our final journey over the barren mountain pass of Kaldidalur, a moonscape that defies description.

Iceland is addictive. It gets under your skin. It’s not easy – physically or photographically but if you’re persuaded by the unlikely, the improbable; if you’re easily snared by drama, colour and sheer rawness, Iceland will take you and keep you.

I’ll be back in winter and then again next August. Northshots will repeat this tour in September ’17 . Drop me a line if you fancy Iceland On Fire!

Sincere thanks to the folks who joined me on this tour – it was a blast.