Skip to content
Blog home > In the field > Worth grousing about 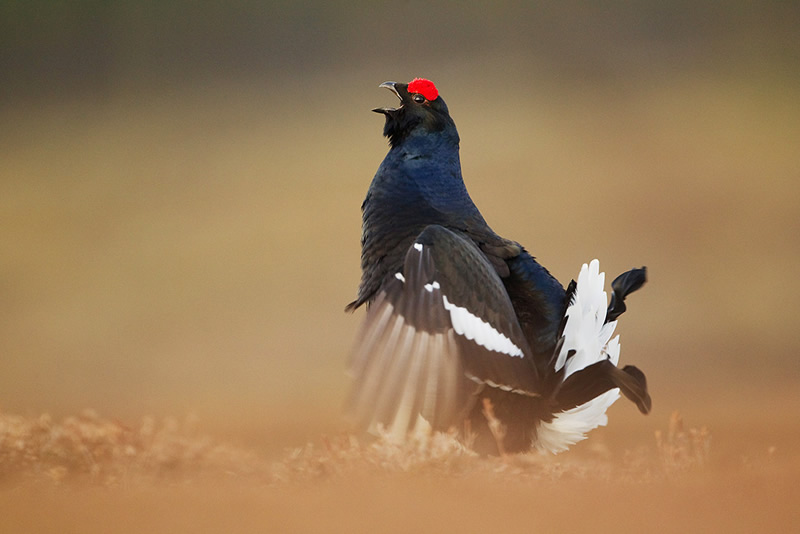 I have a love-hate relationship with black grouse. Mostly, I love them. The hate bit comes in when the alarm goes off in the middle of the night and the last thing I want to do is get out of bed and drive for an hour and stomp across a wet moorland in the dark to sit in a cold hide.

But to witness black grouse strutting their stuff on their display grounds (lek) at dawn is undoubtedly one of the greatest birding spectacles Britain has to offer. It is raw and often very aggressive animal emotion as males defend their turf and females eye up their suitors.

So this is what happens. It’s 4.30 o’clock in the morning, I’m sat in a small canvas hide in the dark with my fingers and toes gradually numbing from the frost and my brain is telling me I really should be asleep, when all of sudden there is an explosive whirring of wings as 6 black grouse descend onto the lek. Then a brief silence as they seem to gather themselves together they launch into Act 1 – a series of cooing and bubbling calls interspersed with rasping notes that fills the air with the most amazing dawn chorus you are ever likely to hear. It really is a magical experience and one that never fails to raise the hairs on the back of my neck.

I have photographed blackcock many times over the past few years and you would have thought that I would have got what I wanted by now. Well I have really but there is always something different to try to capture and this is what keeps me going back for more.

Without doubt the most exciting aspect of black grouse behaviour is when two males fight to gain dominance on the lek as it’s only the strongest and fittest males that will eventually mate with the females that visit the lek. Each male black grouse takes up the same position on the lek at dawn and they fight in roughly the same spot, which means that I’m able to set the hide up to try to capture the best of the action. These battles can go on morning after morning and if the two males are evenly matched then the fights can be very vigorous which makes for some fantastic action-packed images, although it can be very tough on the birds.

But what really makes the difference are the females. After all, no party is much fun with just blokes and so once they show up the males raise their game to another level, performing elaborate flutter jumps, leaping several metres into the air as they try to grab the females attention. This is always a challenge to try to photograph but with a bit of practice I’ve been lucky enough to nail a few of these shots. They can also work well shooting at slow shutter speeds but these can be a matter of taste and to be honest 99% of them end up in the bin!

Last year I only had a couple of sessions at the lek and so I am eager to get back this year to get another fix. And for the first time I have put in a semi-permanent wooden hide, which proved to be a tougher job than expected. Even with a helping hand it took us all day to dig down into the very stony ground so that the hide is positioned at the right level. But at least it’s there now and as soon as the conditions look good I’ll be making a pre-dawn visit. I am also renting out the hide this year and have been delighted with the response so far, however there are still plenty of openings available which can be booked through Northshots.  Visit the website for more details.

6 thoughts on “Worth grousing about”