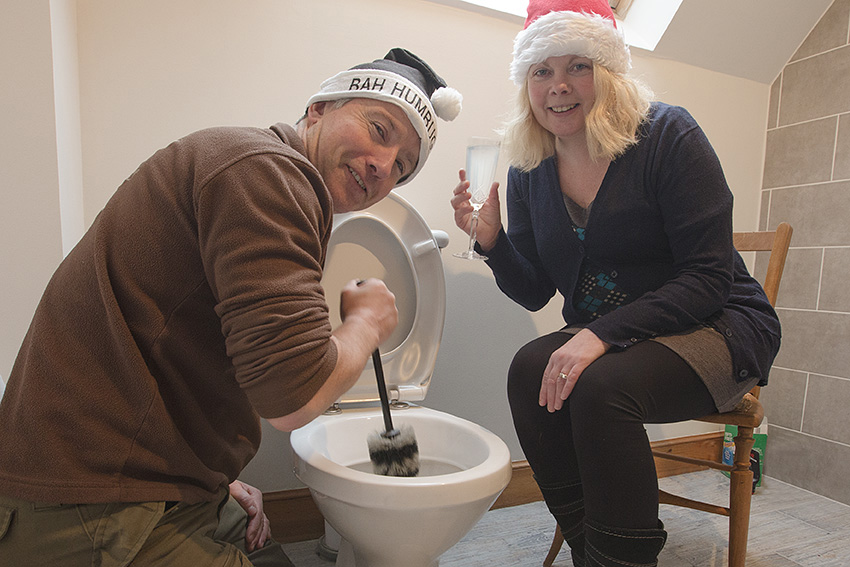 As regular readers will know and as family and friends will testify, Christmas is never a good time in our household. I love it and I think Sam our son would too had he not been poisoned (no it’s not too strong a word) over the years by Scrooge himself. To be fair to Pete he’s not mean or even mean spirited, and I do agree with his rants about over-indulgence and presents that no-one wants but when, without even drawing breath, he starts on about insincerity and hypocrisy before launching into the merits or otherwise of Christmas Day Mass, I lose both patience and the will to live. Christmas turns him into the President of the Grumpy Grumps Society.

In 32 years not once has he bought me a Christmas present. It’s nothing to do with money; it’s apparently to do with ‘principle’. Again to be fair, in 32 years he’s never asked for a present himself (he does get a few things forced upon him though) and so this year, in a vain attempt to lever some festive spirit out of Sir Scroogey Scrooge of Scroogetown, I threatened that in the absence of a gift, I would file for divorce on the grounds of material deprivation. This didn’t go down well but he did, surprisingly and remarkably, relent.

Now of course he wasn’t about to walk into a shop and actually purchase anything – oh no, that would be a step WAY too far, but he did enter into an agreement. Now, much of my time is spent cleaning. I don’t resent cleaning but sometimes it’s nice to get a break.  So Pete agreed (for Christmas only) to do some cleaning. A good start you might think but wait, my negotiating skills are not to be under-estimated. No, no, I wanted him to clean our toilets; I wanted him to suffer and to clean them until they sparkled! And, in his own interest – to prove he was, underneath that gruff exterior, a modern man – I suggested we photographed the momentous event. So here we are with me smugly loitering over my manservant with a chilled Chardonnay. Ha bloody ha is what I say. I’ll not repeat what he said!

I’m not suggesting Pete doesn’t work hard  but every now and then he needs to understand his place in the world – like any rat in a sewer!!

Here’s to a great year ahead – cheers!